Te Hono, the New Plymouth Airport Terminal, has been selected as a finalist in a prestigious international award which recognises architecture that strongly responds to cultural heritage. 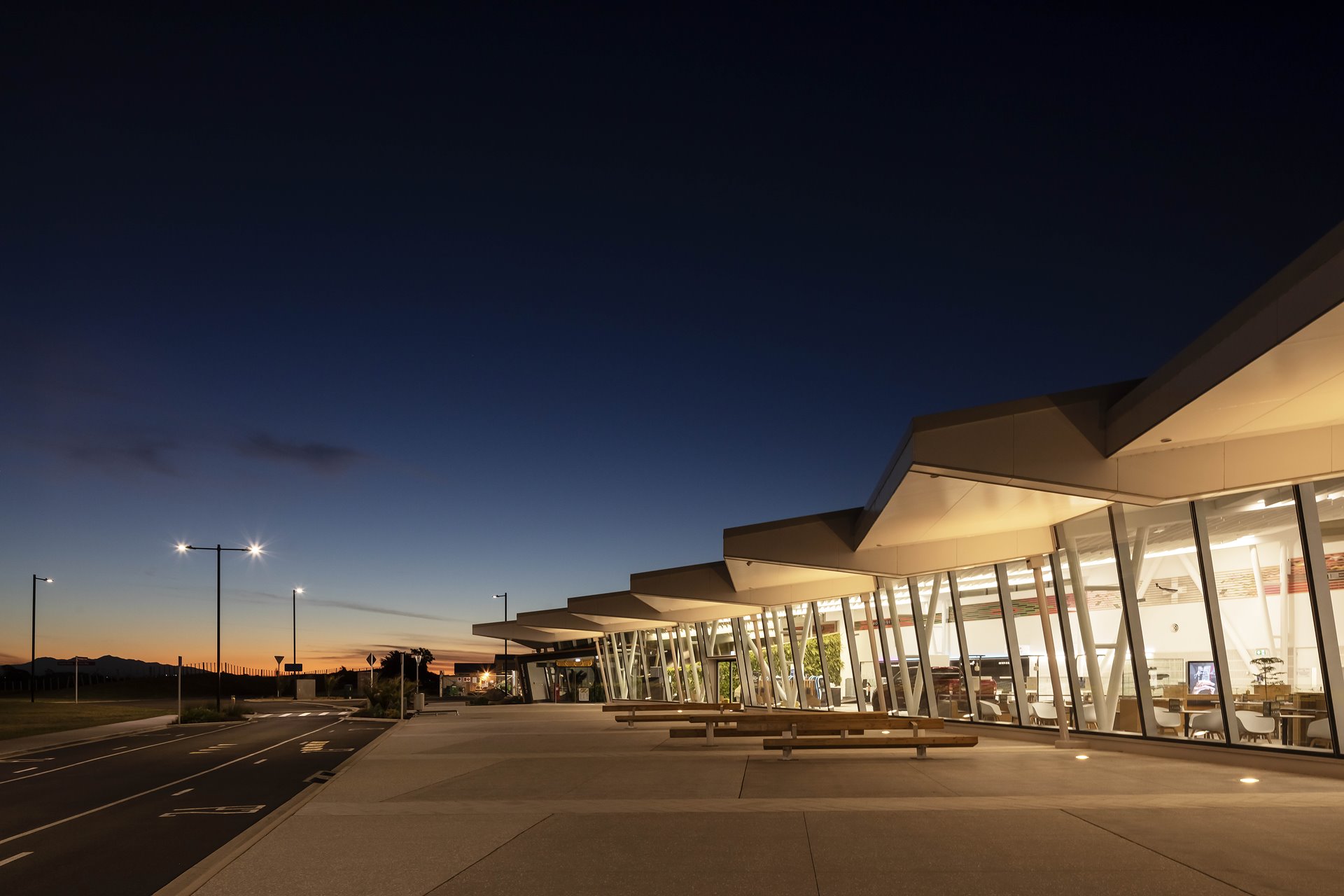 Since its creation in 2015 at UNESCO headquarters in Paris, the Prix Versailles has sought to acknowledge architecture that fosters a better interaction between economy and culture. Te Hono is one of six 2021 finalists in the airports category. The regional airport, designed by Beca’s Design Practice, is in good company; other finalists are the upgrade to New York’s LaGuardia, Berlin’s Brandenburg Airport and international airports in Athens, Kazakhstan and the Philippines.

Te Hono, which means “to connect”, is located on ancestral land confiscated from iwi in the 1960s. Sixty years later, the architecture of the terminal puts mana whenua at its heart.  Integrating members of local hapū Puketapu into the design team was crucial to this process. “This was not just a collaboration, it was a partnership,” says Campbell Craig, Associate - Design Practice, Beca, who was the project architect. “We sat alongside each other, shoulder to shoulder, at the design table in numerous, full-day workshops throughout the concept and preliminary design stages.”

Papa Rererangi i Pukutapu New Plymouth Airport chief executive David Scott reinforces that it was this courageous commitment from Puketapu, and the positive reception from the New Plymouth District Council to changing old design practices, that makes the project special. “The co-design process has resulted in a building not only cultural of significance, but one that works exceptionally from an operational perspective too. It demonstrates what can be achieved when we work together as true partners,” says David.

The aim was to represent important ancestral stories in the fabric of the building. “We wanted to create a place that resonated profoundly with its cultural context, and eschewed superficial adornment,” says Campbell. Six design narratives were chosen and, during a two-day wānanga, hapū member and cultural design lead Rangi Kipa proposed one as the principle thematic. The Ascension from the Earth, Descending from the Sky, tells the story of Tamarau, a celestial being, who was so captivated by the earthly beauty of Rongo-ue-roa (terrestrial being) that he came down to meet her. “This story aligns closely with the creation narrative of Te Ātiawa iwi,” says Rangi.

The roofline of the terminal is inspired by this origin story. One form appears to step up from a landscaped mound (Rongo-ue-roa) to meet the second descending roof form (Tamarau). Their symbolic and literal joining is materialised along the length of the public concourse by a brightly coloured tukutuku panel.

During thinktank meetings, hand-drawn designs were an effective tool to communicate and explore ideas. “The roof form developed from numerous sketches by the design team, highlighting the radial formation and fractal patterning of the feathers on a bird’s wing,” says Campbell. “This was a deliberate attempt to contrast the strength of parallel design drivers, which Rangi explained have no meaning in Māori design.”

Orienting the spine of the building to reflect a journey from the mountain to the Waiongana river mouth was a further way to acknowledge history. Indicative of the main ancestral walking track in this area, it’s also a useful approach from a wayfinding perspective, creating a natural, easily negotiated connection from parking lot through departure area to the plane. On a clear day, Maunga Taranaki can be seen from the concourse. “The airport gives visitors to our region a Taranaki-specific experience and is an opportunity to start to reaffirm our narratives, idioms, ethics and norms – the cultural edifices that support us,” says Rangi.

In this vein, manaakitanga – the Māori concept of hospitality – underpins practical aspects of the design. “It was important for Puketapu to welcome and take care of guests in a place that is in many ways the gateway to the region,” says Campbell. The faceted curved forms of the building at the entrance and airside ‘embrace’ travellers, to shelter them from the elements.

The considered way in which narratives are woven into the make-up of the building means the layered experience can take time to explore. The design team was deliberate about not being too literal or obvious, using subtle gestures to tie into the sophistication of the architecture.

While many users of the terminal and its grounds may not at first pick up on the built aspects and their relevance to the cultural context, they will be drawn to the art. A 70-metre tukutuku work is a bold backdrop to operations, hospitality and retail. Rongo-ue-roa (terrestrial being) is represented in the sassy scarlet of the local hebe that is endemic to the site and Tamarau, the celestial being, is depicted in vibrant yellow. The stitches of the tukutuku, represented by ‘crosses and plus signs’, feature on the panel itself but also throughout the building. Representing togetherness and connection, the stitches also speak to the ongoing regenerative relationship between Puketapu hapū, Papa Rererangi I Puketapu (New Plymouth Airport Company) and the New Plymouth District Council.

Rangi Kipa is proud that the airport has been recognised for a global award like the Prix Versailles, but the local achievement is far greater: “For the most part, we have been invisible in our own landscape for 160 years, so it’s amazing to have the chance to influence, and give life to, some of the things that make us who we are.”

The vision to co-design the new airport alongside a leadership team from Puketapu has allowed an airport which has meaning for all people of the region. “The experience at Te Hono provided a blueprint for working with tangata whenua,” says Campbell. “Moving forward, it’s an approach that will be embedded within all our projects”.

The winners of the Prix Versailles Airports 2021 will be announced at UNESCO headquarters in late November.