COP27: Why this year’s climate conference is so important

In this article, Lokesh Sangarya, Sustainability Co-Lead in our Water team, explores the Conference of Parties’ (COP) purpose and objectives; key achievements of COP26 in Glasgow last year; summarises what has transpired since then in Australia and New Zealand, and what to expect from COP27.

What is the Conference of Parties?

The COP is the supreme decision-making body of the UN Framework Convention on Climate Change (UNFCCC). The forum brings together the 197 nations and territories (Parties) – that have signed on to the UNFCCC. It plays a key role in ensuring countries negotiate and agree on climate change actions.

A key task for the COP is to review the national communications and emission inventories submitted by Parties. Based on this information, the COP assesses the effectiveness of the measures taken by Parties and the progress made in achieving the ultimate objective of the Convention – “to stabilise greenhouse gas concentrations in the atmosphere at a level that will prevent dangerous human interference with the climate system.”

Political leaders gather at the conference to listen, negotiate, challenge, compromise, and agree on the climate change commitments they are willing to make. 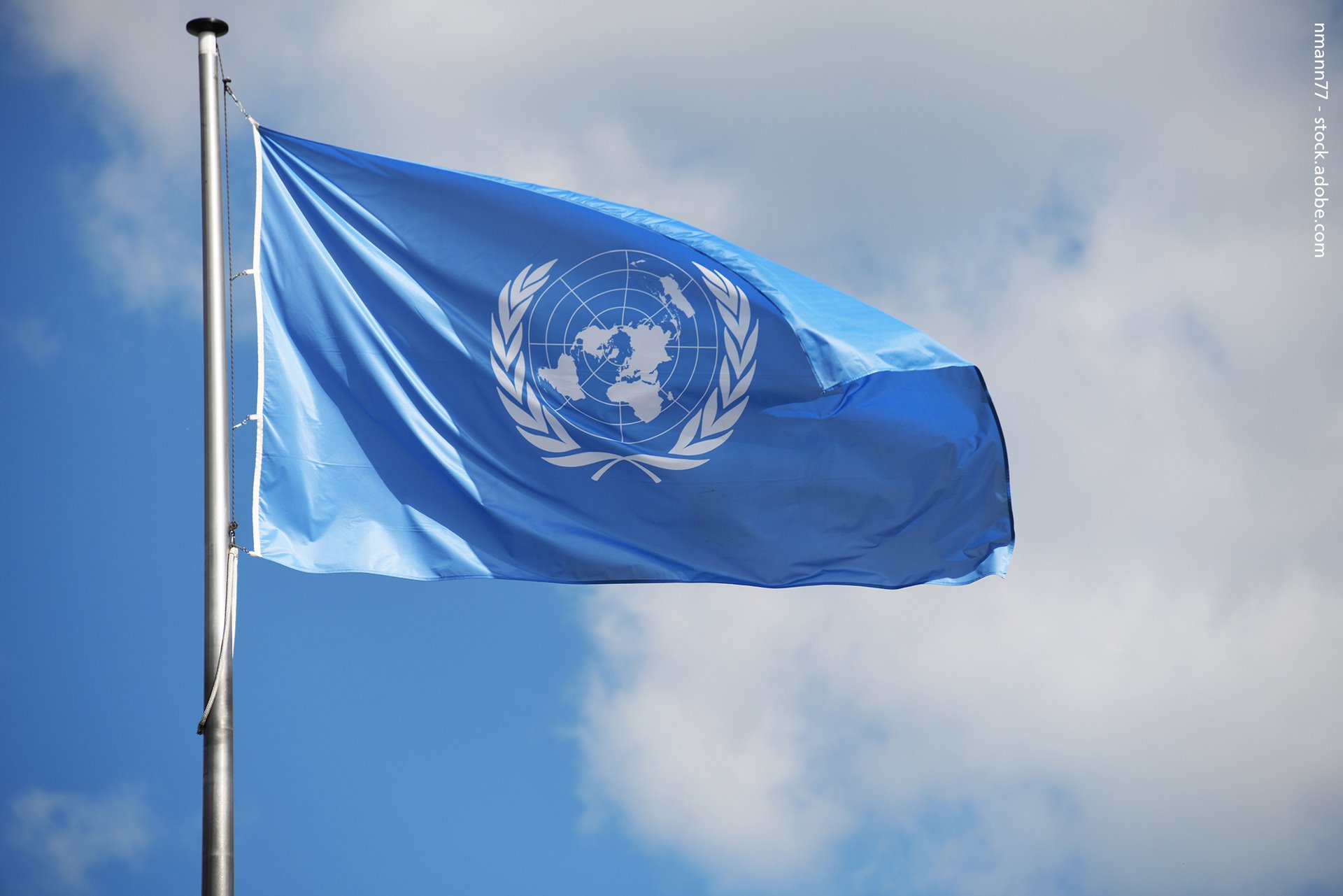 COP26 took place in November 2021, a few weeks after the Intergovernmental Panel on Climate Change (IPCC) published its latest Assessment Report (AR6). The report’s key finding was that if we exceed global warming by 1.5oC compared to pre-industrial levels, we will cause unavoidable increases in extreme climate disasters and present multiple serious risks to our ecosystems and communities.

Negotiations delivered two key outcomes: the Glasgow Climate Pact was signed, and the Paris Agreement’s Rulebook was established. While there was global emphasis on taking serious climate action, many countries and NGOs expressed dissatisfaction on two matters: the language on coal usage was significantly weakened (from ‘phase-out’ to ‘phase-down’), and the lack of transparency on delivering essential climate finance.

Australia and New Zealand had strong representation at the Conference. Australia’s then lacklustre climate commitments came under the spotlight, and their path to net-zero was scrutinised for not having clear plans or intermediate targets that were science-based. New Zealand’s government announced a revised pledge, with a headline figure of a 50% reduction on gross 2005 emissions by the end of this decade.

Over the past 12 months both countries have faced the brunt of climate change with multiple climate disasters, from floods to record high temperatures, while also improving climate actions. These include the Climate Change Act, which came into effect in Australia in September 2022, the launch of New Zealand’s first Emissions Reduction Plan in May 2022 and the country’s first National Adaptation Plan in July 2022. 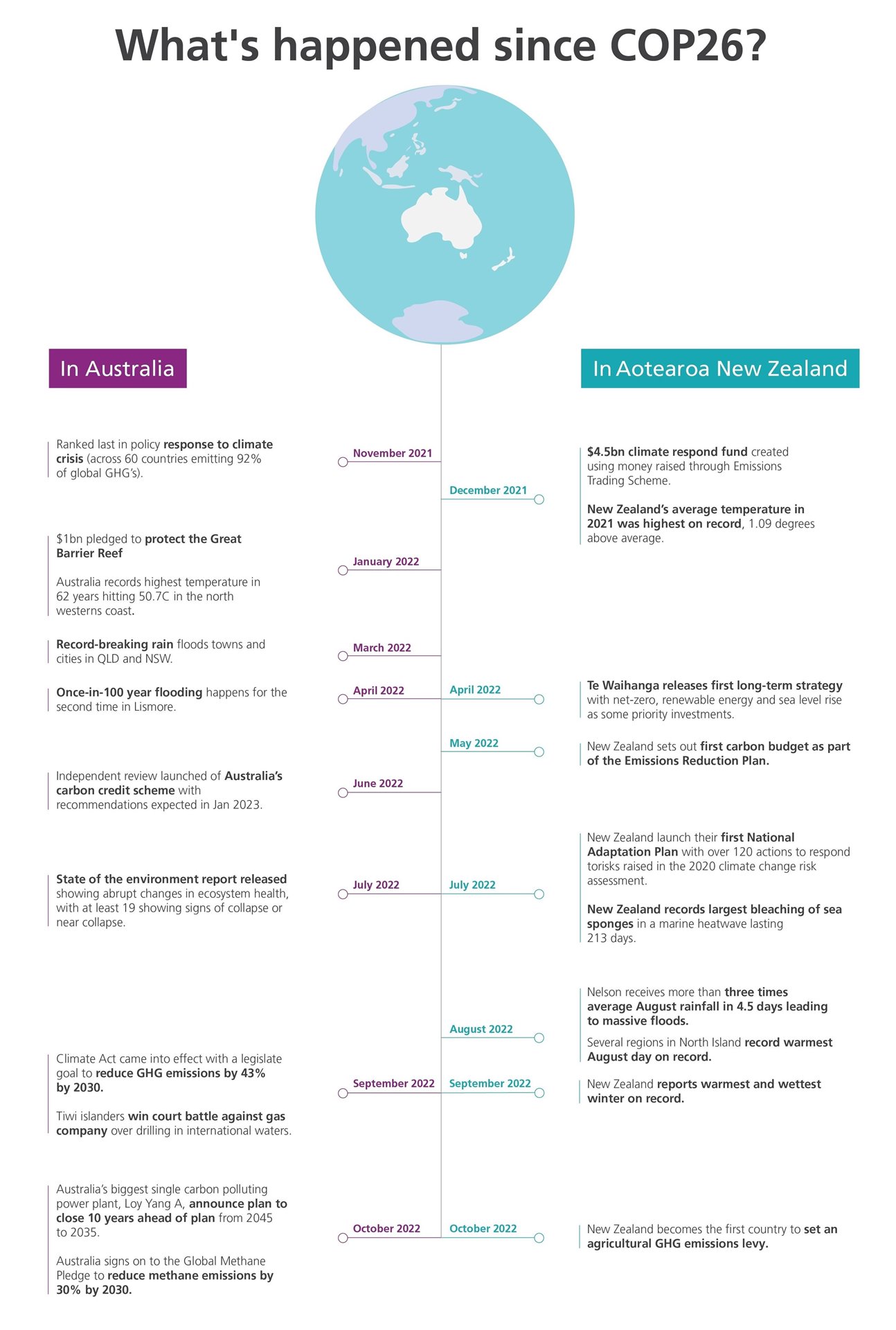 What can we look forward to at COP 27?

The world looks to this year’s conference with renewed hope for concrete action. There will be increased pressure on Parties to deliver implementation pathways to limit temperature rise to 1.5oC.

Currently, the world remains far off track to limit climate change to the levels committed to in the Paris agreement. Glasgow commitments were shown to put the world on track for a 2.4oC increase by the end of the century.

The UN Secretary-General, Antonio Guterres has said COP27 must deliver a “down-payment” on climate solutions that match the scale of the problem. To measure success at COP27, hosts Egypt have set five main targets: Negotiations will also be focused on concrete mechanisms to generate effective carbon offsets (as part of Article 6 of the Paris Rulebook) and contemplate the level of private sector participation. The lack of integrity in offsets has been brought to the forefront recently through claims of greenwashing, and perceptions of businesses trying to ‘buy their way’ out rather than investing in more effective emissions reduction measures.

Australia and New Zealand will play key roles in influencing crucial positive outcomes at this year’s COP27 conference. A large focus of the COP27 will be on implementation pathways to previously agreed targets, and both countries will feel the responsibility to lead positive change.

We must also develop a mechanism to accurately monitor and report implementation progress.  New Zealand's National Adaptation Plan (NAP) is essentially a plan to make a plan, and requires further consideration. Many of the actions highlighted in New Zealand’s NAP will not deliver adaptation outcomes in and of themselves but provide the platform for action. Similarly, as we consider RMA reforms including the introduction of the proposed Climate Change Adaptation Act (CAA) – one of three proposed Bills – to deliver the reform, we know this will take time, inviting criticism that we’re not moving fast enough.

How will future generations deem the success of COP27?

Key outcomes we should expect from COP27 include:

A robust way to align projects to 1.5C

Beca is responding to the climate emergency on two fronts: by minimising emissions associated with our business operations (our carbon footprint), and maximising decarbonisation efforts through the solutions and advice we provide to our clients (which we refer to as our carbon handprint)

In New Zealand, Beca is one of the founding signatories to the Climate Leaders Coalition. As signatories, we have adopted short and long-term gross absolute science-aligned targets for Scope 1, 2 and 3 reductions needed to limit future warming to 1.5oC.

We are also responding to the climate emergency by aligning our actions and advice to our clients (including their projects and programmes) to limit global warming to 1.5oC.

Holding ourselves accountable and helping our clients do the same, we have designed a Science Based Targets Assessment (SBTA) methodology which allows us to assess a project’s alignment with the emissions reductions needed to limit global temperature rise to 1.5C. As we progressively roll this out in coming months, it will be used across the work we do with our clients to ensure that we make everyday better for present, and future generations.  So, stay tuned!

How can megacities prepare for earthquakes?

Reimagining factories of the future with digital twin