Late last month, the Auckland Light Rail Establishment Unit issued its long-anticipated report exploring the costs and benefits associated with establishing a rapid transit solution between Auckland’s city centre, Māngere and the airport.  The Indicative Business Case is now under consideration by Transport Minister Wood and Cabinet, with a decision on a way forward expected before the end of the year.

In this article, Stuart Tucker - Business Director Major Projects and Partners at Beca, takes a look at the Establishment Unit’s summary report to explore the key conclusions and recommendations - and provides his own take on the many factors to consider in city-shaping infrastructure of this size and scale.

This piece is the first in a series of articles from Beca thought leaders, looking at mass rapid transit and its connection to wider urban growth objectives, economic opportunities, and broader social outcomes for the people and communities of Auckland.

The team at Beca has been interested in the progression of the Light Rail project since its inception.  It has been our view for some time that rapid transit is no longer a ‘nice to have’ for Tāmaki Makaurau – safe, accessible, integrated and reliable rapid transit solutions will be central to Auckland delivering on its promise of developing into a sustainable and liveable city for future generations.

Rather than restate the arguments in support of rapid transit, we thought it would be helpful to delve into aspects of the current ‘light rail’ proposal over the coming weeks, in anticipation of a Cabinet decision.  The different mode options investigated in the report, and exactly what is meant by ‘light rail’ as opposed to ‘light metro’, are discussed below.

So – what did we make of the Establishment Unit’s report?  The report is a compelling read and, at just 51 pages, succinctly summarises what has clearly been a mammoth task.  The Establishment Unit was only formed in March 2021 and in the intervening six months it has completed an Indicative Business Case, undertaken initial engagement with key stakeholders and the community, developed a number of options for taking the project forward (including mode and alignment) and set out alternatives for project governance, delivery and funding.

Overall we broadly endorse the report – the data presented is consistent with work we have completed in-house, the options are clear, and the conclusions and recommendations make sense.  Of course, being engineers and planners, we can’t help ourselves with details and so there is still plenty to discuss – some of which is presented below.

The Compelling Case for Change

While the summary report describes the level of future development that is possible with a bus-based public transport system, it doesn’t specifically address the risks associated with this approach – although we would consider it likely covered in the more detailed Indicative Business Case.  The Dominion Road corridor in particular is already operating at or near ‘peak bus’ – driven by increasing development along the corridor, bus operations at near maximum frequency, a lack of capacity at key bottlenecks (including Symonds Street), and the inability to accommodate further bus numbers within the CBD. The reality is that current bus operations on the corridor will cap out, likely well short of anticipated demand in the corridor – meaning that doing nothing is no longer an option.

Assuming that the case for rapid transit through the Auckland isthmus is clear, the decision before Minister Wood becomes a choice between rapid transit vehicles running on a ‘segregated’ guideway (i.e. separated from motor vehicles, cyclists and pedestrians) or ‘non-segregated’ (i.e. rapid transit vehicles sharing the corridor and interacting with traffic and pedestrians).  The report sets out three options in this regard: light rail at surface (non-segregated), light metro underground (segregated), and a tunnelled light rail option (partly segregated).

Segregation offers safety, speed and reliability – three key factors for people choosing whether to use the system or not.  This is reflected in the Establishment Unit’s patronage figures, with annual boardings for the light metro option more than 50% greater than the light rail option.  That step-change in patronage is driven mainly by the trend observed internationally that people are prepared to walk a little further for a faster and more reliable ride – thus increasing the pool of potential commuters.  It’s also impacted by the speed of the service – people are more likely to use a faster service than a slower one, particularly if trains are arriving at turn-up-and-go frequencies during peak periods.
It is telling in this regard that the non-segregated light rail option is unable to support the full development potential along the corridor.

The Establishment Unit has identified the key ridership destinations in the CBD – Wynyard Quarter, Aotea/Midtown and the University precinct.  These locations suggest an east-west alignment through the CBD is preferred – perhaps via Victoria Street – rather than the north-south alignment centred on Queen Street that has been much publicised to date.  Aotea/Midtown is set to become New Zealand’s busiest train station and it makes sense for the rapid transit network to connect here.  We think there are additional benefits with the future Western Line also connecting at Aotea (possibly via Wellesley Street), with inner city stations at Grey Lynn, Ponsonby Road, Aotea, University and Auckland Hospital – before continuing its journey east and west.

Importantly, the Wynyard terminus provides a logical connection point for a future North Shore line.  There are feasible tunnelled connections to either Onewa or Esmonde Roads, with routes north available via the existing busway.  For Albany-based commuters, this offers the prospect of a 23-minute commute to Aotea station, or 57 minutes to the airport.

What of Britomart?  Publicly available figures suggest that less than 25% of ferry passengers make an onward journey on public transport – with a majority served (in future) by the City Rail Link (CRL) and local buses.  This seriously challenges the business case for a Britomart connection.  The difficulty of making a viable connection to the current train station (for options other than surface light rail) further exacerbates the issue. 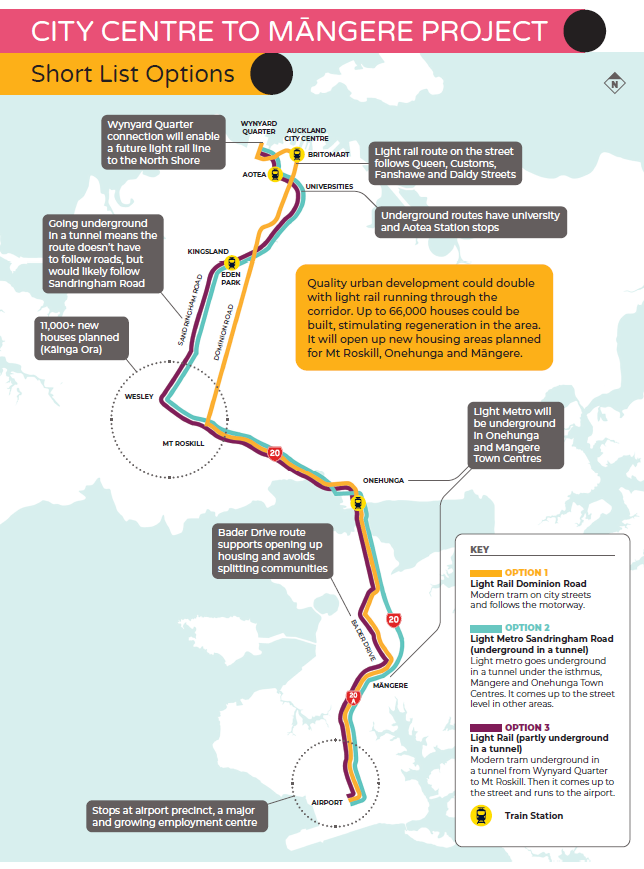 There has been considerable discussion in the media regarding station spacing and the relative benefits between light rail (perceived to be slower with more frequent stops) and light metro (faster but with fewer stops).  We note that station locations are normally dictated by alignment and demographics, rather than by the customary spacings often referenced in these discussions (i.e. 300m to 500m for light rail and 1000m to 2000m for light metro).  Key nodes will usually define ‘anchor’ station locations.  For the Dominion Road route, these would likely include Wynyard, Aotea, University, Mt Eden/Kingsland, Balmoral, Mt Roskill, Onehunga, Māngere and the Airport.  Station positioning in between these locations would then be assessed looking at likely patronage demands, available space, future land uses and overall impact on operating schedules.

A key objective of rapid transit systems is the ability to get people to where they want to go.  A single line can’t deliver this goal and so network connections to other lines and services are critical.  And, the City Centre to Māngere corridor offers a number of connection possibilities.  We think the key ones are Aotea Station (as noted above), Mt Eden Station, Onehunga Station and proposed stations at Mt Roskill and Māngere.

Mt Eden Station certainly has a strong appeal, because it affords riders broader travel opportunities within a single change.  It also has potentially greater development opportunities than Kingsland, particularly if riders are looking to travel quickly to town (seven minutes to Wynyard or three minutes to University at turn-up-and-go frequencies).

Mt Roskill would offer an opportunity for bus interchange for riders travelling from Blockhouse Bay and Waikowhai, in addition to serving the significant Kāinga Ora housing developments planned in the area – an example of combining two key government initiatives to maximise the potential for transformational change.

Connection to the Onehunga railway station would provide linkages to the Te Papapa and Penrose employment centres and cater for a significant population that traverses the Manukau Harbour each day; while Māngere could include bus interchange facilities for riders travelling from the surrounding area.

Do we really need to go to the Airport?

There has also been significant debate in the media about whether the system should include services to the airport.  In addition to servicing the obvious flight traffic, the airport precinct is anticipated to provide employment for up to 30,000 people.  The Establishment Unit’s figures suggest inbound morning peak boardings from the airport precinct are at around 1,000 riders per hour.  We think the combined figures could be higher – perhaps in the order of 10% to 15% of total inbound boardings.   This compares to the incremental cost of extending the rapid transit infrastructure from Māngere to the Airport of around 8% of total cost – suggesting a positive incremental benefit.

Overall, we acknowledge the work carried out by the Establishment Unit and the direction that its initial report provides.  It is a succinct summary of the complex challenges associated with provision of rapid transit across Auckland’s central Isthmus.  Noting that there is still much work to be done, the report is a robust consideration of options and provides a clear recommendation.

The choice before Minister Wood is between faster metro vehicles at turn-up-and-go frequencies versus slower light rail units interacting with street traffic along part of the route.
Notwithstanding the eye-watering sums involved, we think the answer is clear – Auckland needs a modern, fast, reliable rapid transit system that can support its aspirations for development, liveability and a healthy environment over the next fifty years.

In subsequent articles, Bryce Julyan - Environments Practice Lead, and Matt Lindenberg - Technical Director Planning, will discuss the potential for Light Rail to not only transform how we might move around and experience our city in the future, but also to assist in achieving the government’s closely aligned objectives around enabling quality-built environments, increasing housing choices and reducing carbon emissions. And, Kathleen Bunting - Technical Director Urban Planning, will consider the project’s role in shaping and delivering positive outcomes for Tāmaki Makaurau, and how these benefits could be maximised.