Why don’t engineers earn as much as lawyers?

Despite both engineering and law degrees taking four years, lawyers are perceived as being more highly paid than engineers. Is this perception accurate? If it is accurate, why do lawyers earn so much more? Are they smarter, harder working, more professional or just lucky?

Both are such highly regarded professions yet lawyers seem to earn more. I say ‘seem’ because there are so many variables just how can you tell? A former colleague, Jim Douglas, and I had some good discussions and debates about this topic. After a while, we decided it was time to do some research to get to the bottom of it.

Intelligence
Could the average lawyer simply possess a higher level of intelligence than the average engineer and  therefore rightfully be paid more? If you look at leading Australian university entrance requirements, you could conclude this. These universities look at students’ state-wide academic achievement records which rank students in bands, from 1 (highest) to 25 (lowest). If you intend to study law, you need to score between 1 and 3, while if you want to study engineering you can score between a 1 and 7.

On the basis of more stringent degree requirements, you could almost say that lawyers are on average more intelligent than engineers! Almost!

Employment
For those that do manage to enrol and complete law degrees, they are faced with a tougher employment market. In 2014 the full time employment rate of law graduates, within four months of completing their degrees, reached an all-time low of 74%. In comparison, 82% of engineering graduates had full time work within four months of completing their degree.

Working hours
After completing your tertiary studies and successfully getting a full time job, the real test begins. Unfortunately it is difficult to find data that accurately depicts the number of hours worked by various graduates due to companies and personnel preferring this data to remain private.

Professionalism
As an engineer it pains me to say there is almost a certain level of prestige associated with being a lawyer. According to a 2013 Men’s Health public survey...

...being a lawyer was seen as the 5th most respectable career choice in comparison to engineering which was ranked 8th.

Is this because upholding and administering the law is seemingly more important? Or is it because lawyers use complex legal jargon; while many people still think professional engineers drive trains?

Salary comparison
It is overly simplistic to describe lawyers as being better paid than engineers. Trademe’s 2014 Salary Guide reports the median engineering salary and private practice law salary are the same - both $75,000 and ranging from $40,000 to $125,000.

Hay’s (New Zealand) 2015 Salary Guide shows the average starting salary for lawyers is approximately 30% lower than engineers. However lawyers’ salaries increase more quickly, achieving parity with engineers at the Associate/Senior Associate level. Partner salaries are on average 7% higher than those of Principal Engineers, with lawyers’ salaries increasing further if they become Equity Partners.

Therefore, both professions appear to have similar average pay levels with engineers being better paid at a graduate level, and lawyers better paid at more senior levels. 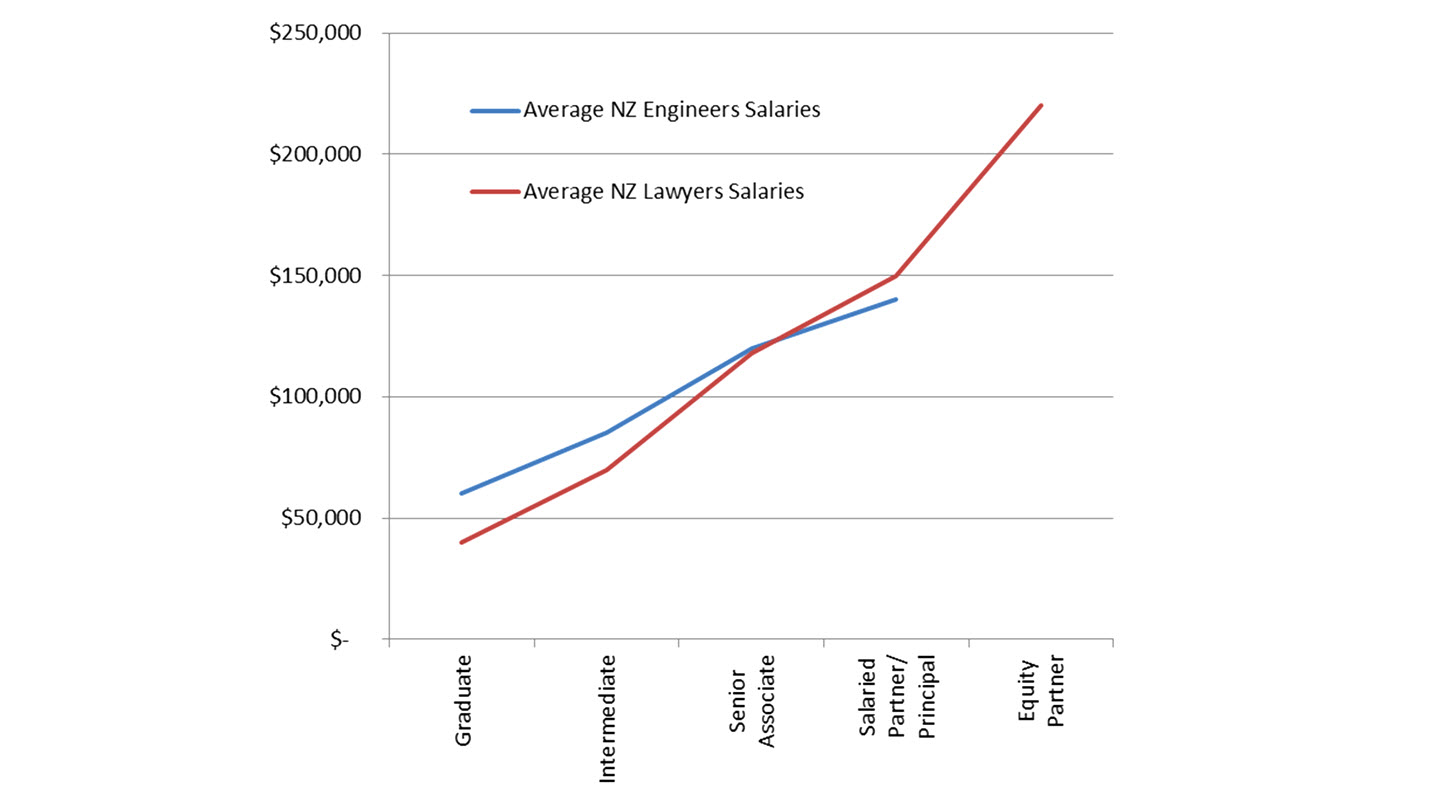 Reviewed statistics indicate that law students have a more difficult time obtaining their undergraduate degrees and securing full time work. Then those that do secure a full time job, work longer hours than the average engineer. So perhaps lawyers who successfully negotiate law school, find a job and then work longer hours are entitled to their larger salaries at a senior level?

Both engineers and lawyers are well respected professions, there is no debating that.

Both have salaries and job opportunities well above average, so neither is a bad choice. As to why engineers aren’t paid as much as lawyers (if this indeed the case), it could well be the just rewards for more difficult studies, longer work hours, lower starting salaries all within a more regulated profession. What do you think?

Raising the game for a circular economy

Switching the Light to Green: Realigning the food chain for a low carbon future