Low-damage building design is fast gaining public interest, particularly after the Canterbury earthquakes and the more recent events in Kaikoura. For us, the technology couldn’t be closer to home as our Christchurch team gets ready to move into a new base-isolated building – the ANZ Centre.

In just under a week, Beca’s Christchurch team will return to the central city after six years of displacement and a commitment to support the redevelopment of the CBD post-earthquake. For many in our team it will mean a number of adjustments to their daily rituals – a different cycle route into work, a new office environment, a changing face behind the coffee machine, and access to a variety of shops, cafes and other city attractions.

For me, and others directly involved with the design and construction of the building, it caps nearly 3½ years of professional dedication and the satisfaction that comes at the end of a successful project. As one of the structural engineers responsible for its design, the project has also given me a somewhat unique chance to be involved in creating a building that I will likely spend a lot of time in.

The mind shift that occurs knowing this, in the context of Christchurch and the on-going tremors that keep reminding us of what happened, has created its own challenges. There are additional pressures knowing that I will share this space with my colleagues. There have been sleepless nights. But aside from the rigor that underpins engineering design, I have often been reassured by the fact that the building is base isolated. I can thank our client for his willingness to embrace this type of low-damage technology. 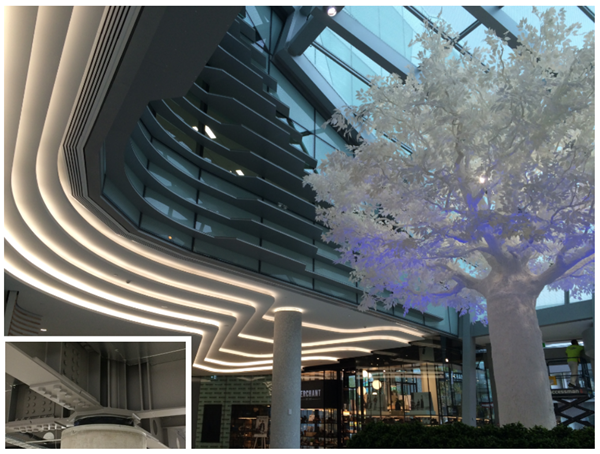 Inside the atrium at the ANZ Centre. Inset, a closer look at one of the building’s 53 base isolators

The public conversation about low damage design continues in New Zealand, as the Canterbury earthquakes are supplanted in the front of our minds with the more recent events in Kaikoura.

In buildings such as the ANZ Centre, and a number of others that have been built in Christchurch with base isolation, the benefits are threefold:

One of the silver linings of the Canterbury earthquakes was the attention given to building performance by the property owners and the general public. In particular, the conversation it helped promote about how we, as engineers, determine appropriate criteria for designing buildings.

Historically the main focus of structural engineers has been on preserving life safety in the event of a large earthquake – often defined as a 1 in 500 year event. While this remains a crucial role, the Canterbury experience highlighted the need to consider other possible performance targets and the value of low-damage design.

In particular, it drew to light one of the guiding principles applied by structural engineers – that a building structure could sustain damage provided it did not result in loss of strength or stability; the concept of ductility.

Like the paperclip that can be bent back and forward, a building can be permanently deformed provided it never reaches the point when the paperclip goes ‘ping’.

In practice this meant that it was, and still is, acceptable under the Building Code that a building structure could be damaged in earthquakes with a likelihood as little as 1 in 25 years. While this allowed buildings to be constructed more economically, were building owners aware of this risk? Is it acceptable for a modern building to be condemned as an economic write-off, despite satisfying the life safety goal, in an earthquake that might be expected to occur two or three times within a generation?

Prior to the Canterbury earthquakes, the idea that conventional buildings could be so easily damaged in a moderate shake was not well understood by building owners. The prevailing market conditions did not provide good incentives to do anything differently; construction costs were high and through the quirks of New Zealand’s EQC policy, comprehensive and inexpensive insurance coverage was readily available. Designing buildings that depended on ductility – the hinging paper clip – meant that material savings could be made by the developer while the insurer carried the increased risk of damage and the building occupier faced the prospect of down-time or loss of premises.

At the other end of the spectrum, the base isolation system at the ANZ Centre means that there is a much lower likelihood of damage to the building structure or contents in earthquakes approaching a 1 in 500 year event. To achieve this sort of protection to the structure with a conventional building is either very expensive or compromises the way the space can be used. To protect the building contents using conventional methods is next to impossible.

But perspectives are changing. People have experienced first-hand the impact that such design decisions have on the way we use buildings. We talk openly about our buildings and the technology and innovation that goes into them. And the more we talk about them, the more informed the population becomes on these issues. This means that consumers (tenants and investors) will know to demand more from developers, so that low damage design becomes the market norm, and not a premium extra.

Let’s not waste our wastewater, or our water!