When the journey is the destination

Melbourne’s Level Crossing Removal Project (LXRP) is one of the largest rail infrastructure projects ever in the state of Victoria. Established by the Victorian Government in 2015, the project scope includes the removal of 75 level crossings across metropolitan Melbourne, and rail network upgrades such as new train stations, track duplication and train stabling yards. Due for completion by 2025, the project aims to improve community safety, unclog local roads, grow network capacity and enable more regular and reliable train services.

As part of the LXRP, the Southern Program Alliance (SPA) was formed to deliver level crossing removal works along the Frankston line; one of Melbourne’s busiest railway lines, winding 43km along Port Phillip Bay. We’ve had a key role to play as part of the alliance design team delivering both the Initial and Additional Works Packages.

Our engineers and professionals in various capacities and career levels have supported SPA on this key rail project  – making the most of opportunities to work with an amazing team of people where partnership, positivity, collaboration and openness to learning are key to getting the job done. Two of our engineers, Adam Straw and Daniel Fedele, who since joining Beca, and having worked on road and rail projects across NSW and Victoria, were chosen to join the alliance.

Here, we chat with both Adam and Daniel about their personal journeys, and highlights from working as an on-site engineer during the design and construction phases of the level crossing removals at Carrum, Mentone and Cheltenham.

How did the opportunity to work on-site with the SPA come about, and what was involved?

As a Site Engineer, I was responsible for programming of works, site logistics planning, safety, cost tracking and quality assurance. The role was different from a typical Construction Phase Support (CPS) role in the sense that I was responsible for the logistics and delivery of works on-site, rather than providing specialist design input to specific issues raised through requests for information (RFIs). This led to me dealing with much more of the intricate details and minor complications that inevitably occur on site than I would have in a typical CPS role. Also, by nature of me being so involved in the design myself, I was able to provide real-time feedback and clarification to tradespeople on site.

Daniel - I too had worked as part of the SPA design team for almost three years and led the design for three of the bridges across the Mentone and Cheltenham sites; two of which were bridges for the station concourses and another a pedestrian bridge. To build these bridges, and a lot of other scope, the project shut down the train tracks and occupied the rail corridor. When the opportunity came about to provide construction phase support during the main occupation, I didn’t hesitate to take it up, so I could see the designs come to life and better understand bridges from a construction perspective.

The main part of my role as an on-site design representative was supporting the construction works during the occupation from a design perspective. Key aspects were addressing design queries and on-site issues as they arose, including undertaking and co-ordinating load assessments for various construction plant on the bridges and retaining walls.

What were some of the on-site highlights?

Adam - Two key moments stand out for me from my time on-site. The first was in the final days of the rail commissioning occupation, when it was apparent that all our hard work and planning had paid off. It was a monumental effort from the team to complete that amount of work in two weeks of 24 hours per day construction.

The second moment, also towards the end of the project, was when I was approached by two local residents who were absolutely thrilled with the transformation we had made to the area. Hearing the excitement in their voices about the work we had delivered is something I will always remember.

It’s a proud feeling to have been part of the team which brought the project’s community aspects to life, such as the new open spaces under the rail viaduct. The link this will provide from the traders’ area directly to the beach will be an amazing addition for the community.

Daniel - Overall, it has been enjoyable to watch the various LXRP projects evolve from the development phase right through to commissioning. Having a program, rather than individual projects, allowed both the design and construction teams to ‘roll-on’ to the next project, resulting in strong working relationships and efficiencies in design development.

Since I started on the project, the SPA has removed a total of six level crossings on the Frankston Line, with another five planned in the next 12 months. In addition to this, there has been significant investment into improving outcomes for the community through the integration of the Mentone Heritage Gardens and the Cheltenham Station forecourt into the design solution. In the Initial Works Package that I was involved with, the Carrum precinct incorporated an urban space beneath the rail bridge for the community to enjoy. Overall, it’s been one great experience.

How has the experience made you a better engineer?

Adam - I have gained a much better understanding of which design elements assist in the smooth running of a site, and what elements will likely result in complications and hold ups. The experience has also helped me in the areas of designing practical engineering details that are easy and quick to construct. There’s no better feedback you can get on how easy a design is to build, than from the tradespeople putting it together.

Daniel - As a consultant, the more exposure you can get to the construction phase the better. I consider myself lucky to have been directly involved, as I’ve developed a good understanding of where the biggest opportunities lie in terms of reducing construction timeframes within an occupation. A key takeaway for me has been the collaborative approach between design and construction, which can contribute greatly to improved outcomes.

What would be your advice for others considering on-site opportunities?

Adam - If gaining site experience is something you want to pursue, then make your intentions clear to as many people as possible and go for it. There are plenty of opportunities out there, and you’ll gain valuable experience from any time spent on-site. Continue also to build relationships with the construction team during the design development stage. The level of trust and rapport you develop, as well as the many collaborative skills and enhanced understanding of each other’s roles, will contribute positively to a secondment - and your future career.

Daniel - Working as part of the SPA has been a great experience and has really benefited me in terms of my career development. In my opinion, if you are interested in working on-site for a particular project, you should definitely pursue this and discuss what the options might be with your manager. My team leaders and managers have always been very supportive and accommodating of my personal ambitions. If you are looking for your next step, then this could be it!

Find out more about our work with the Southern Program Alliance. 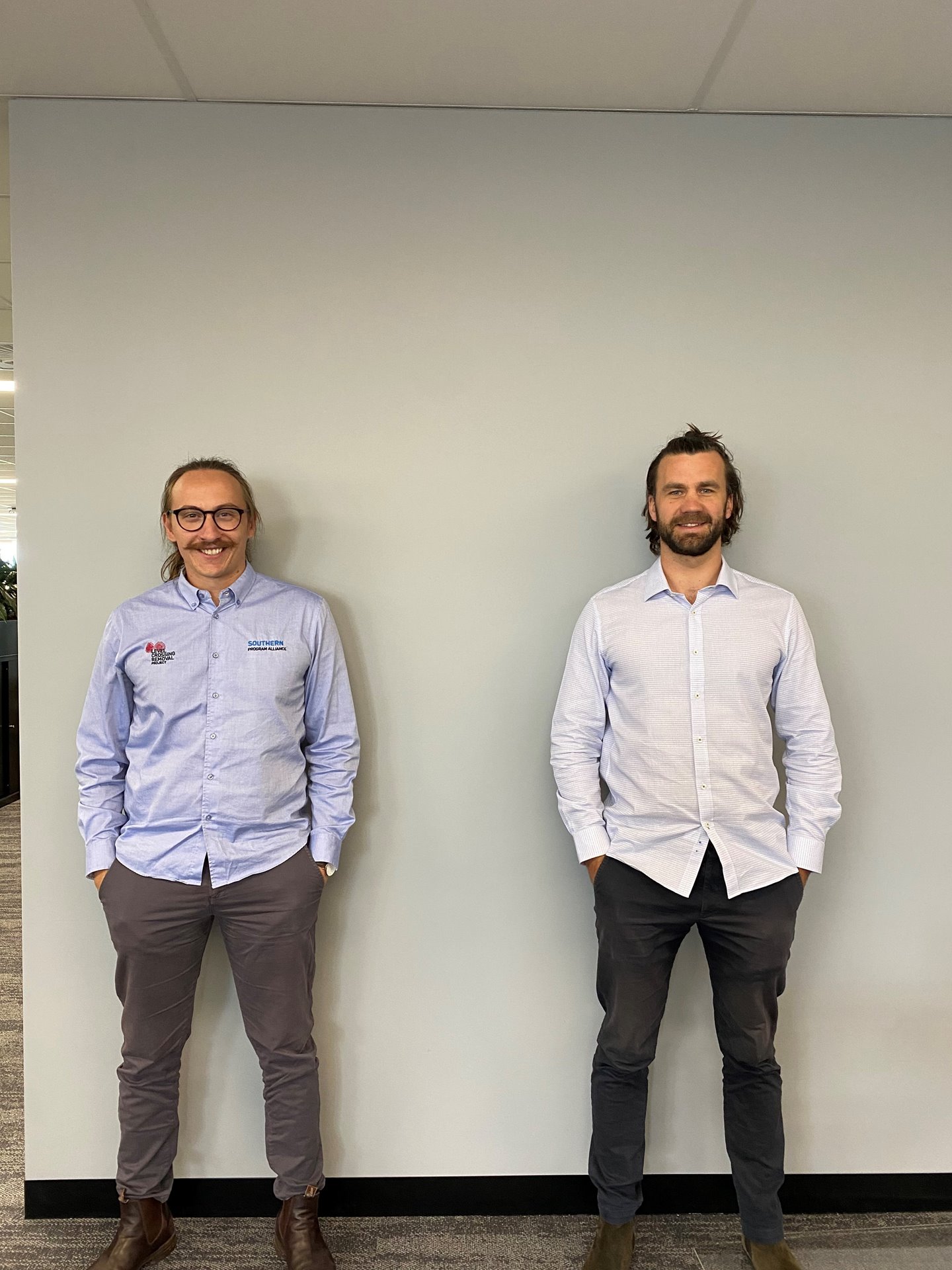 Working as part of the SPA has been a great experience and has really benefited me in terms of my career development. In my opinion, if you are interested in working on-site for a particular project, you should definitely pursue this and discuss what the options might be with your manager.

It’s a proud feeling to have been part of the team which brought the project’s community aspects to life, such as the new open spaces under the rail viaduct. The link this will provide from the traders’ area directly to the beach will be an amazing addition for the community.