Erionite in Auckland – In perspective

Erionite – an alteration product of volcanic glass that many people may have never heard of until recently, is becoming increasingly familiar to Aucklanders in the context of the large-scale tunnelling and earthworks projects planned or underway across the region.

With erionite linked to potentially serious health effects more commonly associated with asbestos, and in a city built on a volcanic field of approximately 53 volcanoes, such interest and concern is understandable.

But, as with many things popularised, it is important to take into account what we know about erionite in the Auckland region currently, and separate that from the hype and alarm that surrounds something somewhat unknown with the potential to be damaging to our health. Despite all the volcanoes in the region, the rock layers that might contain fibrous erionite are relatively uncommon, and likely sourced from much older volcanoes well outside Auckland’s volcanic field.

Erionite is an alteration product of volcanic glass first identified in the late 1970s1 in tuff layers (light porous rock formed by the consolidation of, in this case, andesitic or rhyolitic volcanic ash) that occur at some locations in the wider Auckland area, interbedded with the more common mudstones and sandstones of the Waitemata Group rocks that underlie the region2. The tuff beds in which erionite is found are generally a millimetre to a few tens of millimetres thick.

Overseas research suggests the disturbance of rocks containing the fibrous form of erionite can generate airborne fibres that, if inhaled, have been linked to health effects typically associated with asbestos, such as malignant mesothelioma3.

However, drawing parallels between Auckland risks and this overseas research on cancer mortality rates, such as from the Cappadocia Region of Turkey, where dwellings have been built into thick accumulations of erionite-bearing tuffs since Palaeolithic times - is somewhat misleading. The tuff layers in which erionite might be found in the Auckland Region are very thin and relatively rare. They are sufficiently unique, that they are able to be used as “marker” beds, to correlate position in the stratigraphic profile from one part of a site to another.

So what is the risk in Auckland?

A group led by University of Auckland researchers has just been awarded a research grant from the Ministry of Business, Innovation and Employment (MBIE), of NZ$7.7 million over four years, to investigate the risk from erionite in Auckland.

The group will focus on the distribution of tuff layers in the region and better understanding the presence and nature of erionite contained within them – noting that non-fibrous forms of erionite such as occur in vesicles (small cavities formed by expanding gas or steam) of some of Auckland’s basalts are not considered hazardous. It will also work to develop new methods to sample and quantify erionite, and finally guidelines for the assessment and management of risk in construction projects where erionite is found.

It has been suggested that tunnelling and other earthworks projects in the Auckland Region may put construction workers, among others, at risk. A consequence of this, is that significant testing programmes are already being embarked on, ahead of the above research, and concern is mounting around spoil disposal.

While it is appropriate to be concerned about the risks from exposure to fibrous erionite, it is important to recognise that the fibres need to be inhaled - which is unlikely to occur if the spoil generated from tunnelling is a slurry. Moreover, erionite only occurs in the uncommon tuff layers within the Waitemata Group, and not in the more substantial sandstones and mudstones that make up the majority of the region’s sedimentary rocks.

This also means that “per metre” testing regimes, which test samples collected at regular intervals within the Waitemata Group, will spend a significant amount of money and time undertaking tests that will yield negative results. Instead, the investment in x-ray diffraction, thin-section and spectroscopy analysis to check for erionite within these regular samples would seem to be better focussed at testing samples of the tuff layers themselves – i.e. on identifying the actual risk.

Until more clarity is achieved by the research programme being initiated, a useful approach would be to ensure that all investigation boreholes are properly logged by a geologist and to focus erionite sampling and testing programmes on the tuff layers, where these layers are observed in the borehole core.

The borehole investigations normally carried out as part of construction projects would in nearly all cases be sufficient to identify whether tuff layers exist at a site, as they tend to be laterally continuous at the scale of a project site.

Safety on construction sites and in our communities is paramount, and it is vital we are aware of and address any potential risks erionite may pose. However, it is also important to maintain perspective and base our planning and decision making on the foundation of science and what we know is representative of facts on – and in - the ground. 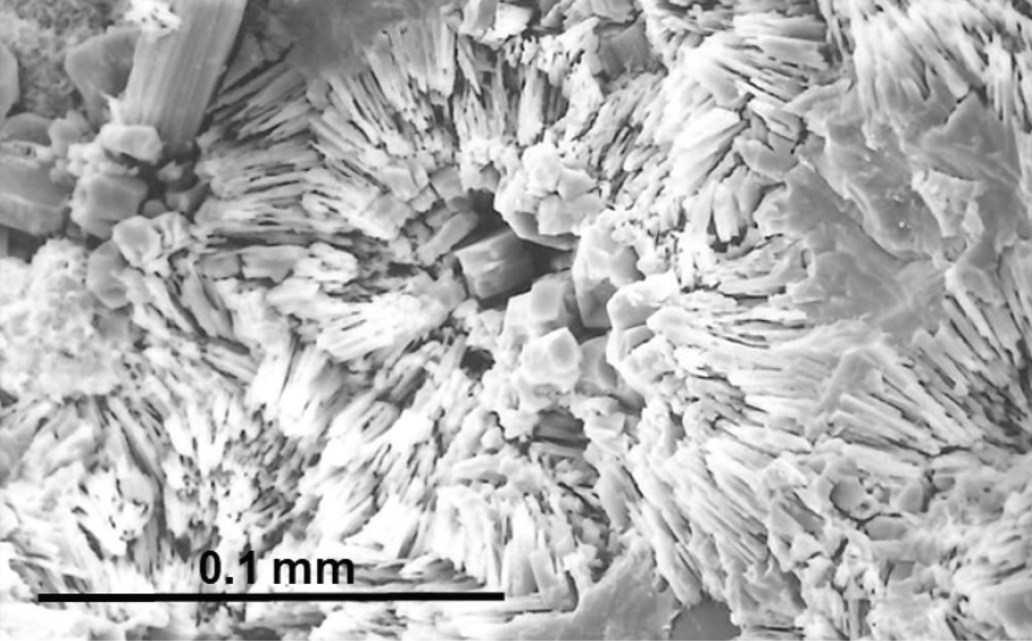 Pictured is an example of fibrous erionite4

Energy Infrastructure – at a crossroad?

Reimagining factories of the future with digital twin

Circular by design – Framing it up