Craft beer: Does it need to cost the Earth?

Many craft brewers are expanding rapidly, which introduces complex challenges for those investing to reach more customers – especially those on smaller sites where space is at a premium and there are limited utility, water and trade waste disposal facilities.

Producing multiple beer styles, instead of one at large scale, has its challenges. Larger brewers have pursued the art of producing consistently high-quality beer at scale, with low environmental impact, and have expended significant research, development, time and capital in developing technologies that increase the sustainability of their businesses, significantly reducing energy and water use in the process.

Five ways to improve efficiency without sacrificing the craft

If you can’t measure it, you can’t improve it! Smart metering, implementing additional metering points and using accurate sampling (to determine extract recovery and losses) can help you understand where production costs lie and improvements can be made.

Sensors are getting cheaper, which helps. The ability to monitor and measure pressure drops across heat exchangers can give great visibility to fouling and when the ideal time is for ‘cleaning in place’ CIP.

Don't make capital improvements just yet. There are usually significant opportunities in optimising what you already have. In the first instance, it’s worth checking how production procedures are followed, and what automatic sequences and setpoints have been left unchanged. A classic example is CIP sequences where there are often opportunities for shortening and reducing times. Often, standard procedures are written and repeated to an exceptionally high standard, irrespective of product type, so careful scheduling and review of these can result in significant optimisation.

Wort boiling, which is often responsible for up to 20 per cent of a brewery’s thermal energy requirements, has been scrutinised over the years, it’s yet another way to optimise production. A 4 per cent volume evaporation is now typical, usually set because this is also the minimum amount of evaporation that also satisfies the energy requirement for wort preheating. If you boil at a greater rate than this (above 4 percent volume evaporation), it's worth considering a reduction. Many brewers have found no discernible impact when reducing from 6–7% to this level.

Brewing is inherently a batching process which creates large peaks in demand for heating and cooling.

Buffering and utilising energy storage tanks can make a big difference to the capital requirements and sizing of utilities required to produce beer, and can significantly reduce peak loads.

Stratified energy storage tanks are finding more uses than just hot water recovery from kettle vapour condensers: Any source that creates an excess of hot water can be stored in this way and re-used to suit demands in brewing and packaging areas. Traditional energy stores are usually very tall but this need not necessarily be the case if multiple tanks can be accommodated.

Refrigeration energy can also be stored in this way and can be extremely useful for reducing peak loads caused by transfer operations such as wort cooling.

Breweries operate on a lot of rules of thumb which may not always hold when scrutinised. Do you really need water chilled to that temperature? Could it be a few degrees warmer? What about the target temperatures when you’re brewing water for mashing and lautering – is the strike temperature adapted to suit prevailing conditions?

For example, low initial mashing temperatures can affect brewhouse energy efficiency, leading to wastage of hot water recovered from wort cooling and increasing energy use at the mash vessel.

Wort cooling is also worth a significant focus. Many systems are specified by equipment manufacturers to provide the lowest capital cost, and do not consider the ongoing operational cost.

If you only require your wort to be cooled to 16–18°C, it’s worth considering an option which can use cooling water to within 2–3°C of the temperature you need. Investing in plate heat exchanger area is cost effective and can significantly reduce refrigeration energy – sometimes by as much as 50%.

If you run an existing operation, it’s also worth checking previous design assumptions. For instance, once upon a time, Whirlpools were uninsulated to promote lower refrigeration loads at wort cooling. But if you rely on the wort temperature to be high to maximise heat recovery, it might be worth adding insulation.

Craft is as much an innovation in engineering as it is in new and exciting products. Most of these things sound like heresy but thinking differently and carefully scrutinising your existing brewing principles can unlock significant value and opportunities, especially when looking at reducing capital cost to enter the market.

Ideas that challenge the status quo and offer significant opportunities include:

Termed 'simmer and strip', this is a technology which AB InBev has offered to license freely to small brewers. It works because when you break down the principles behind wort boiling (see below graphic), only one of the objectives – volatile stripping – requires energy intensive boiling and evaporation. All that the others need is time and temperature. 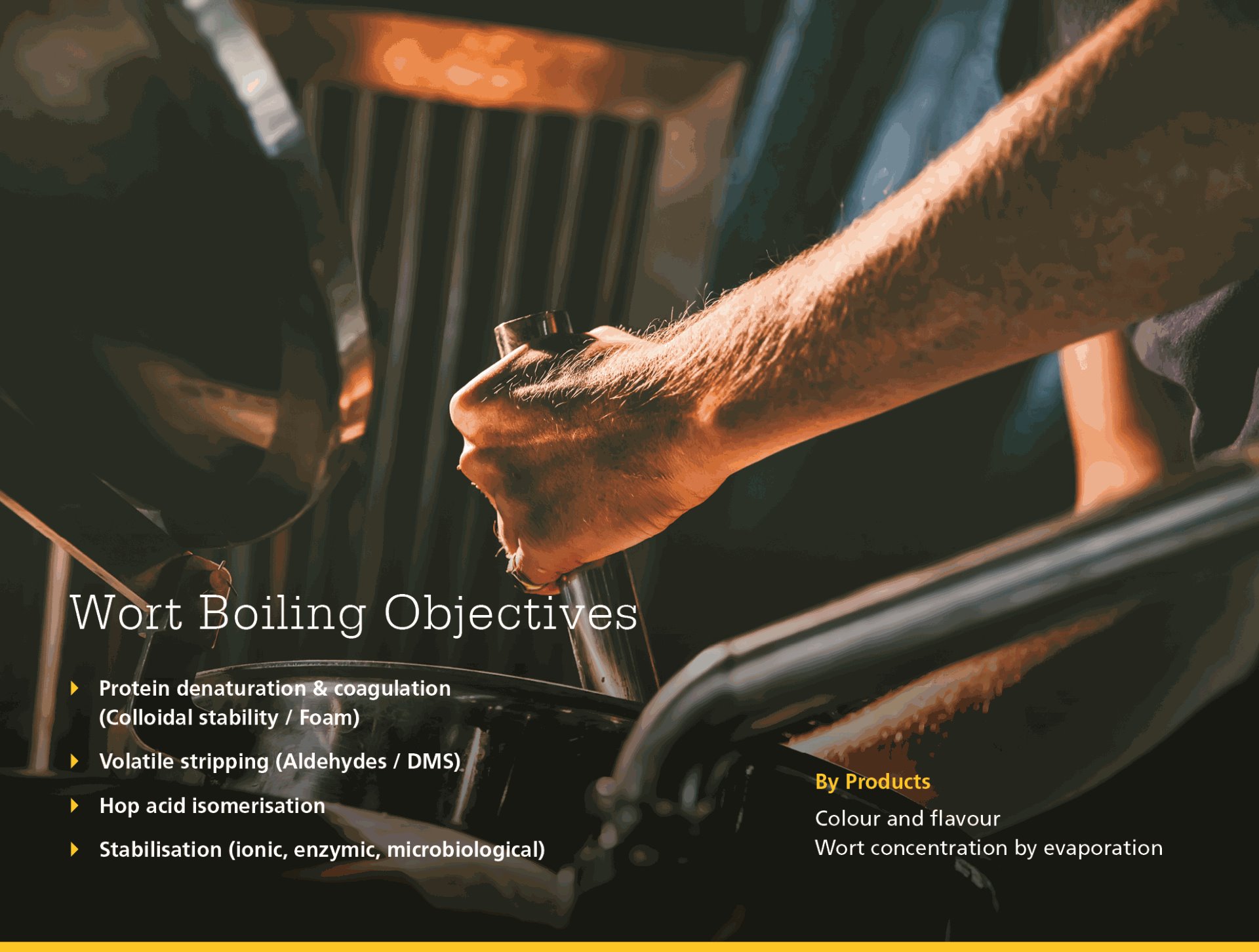 Evaporation is an expensive way to create bubbles. But AB InBev has developed a technique that uses gas-sparging to achieve the objectives of wort boiling without the energy-intensive requirement. On a like for like basis, simmer and strip has helped reduce thermal energy use for their breweries by a further 5% when compared to a wort boiling system operating at a typical 4% evaporative boil.

Methods that improve circulation and mixing within fermenters during fermentation and cooling can significantly reduce production times and improve the utilisation of yeast. They can also help improve dry-hop utilisation rates, reduce cooling times during chill back, and in conjunction with other technologies it can significantly reduce overall losses. All these things add up to less vessels required, reduced ingredient usage and more beer!

This technology removes a portion of the malt husk prior to mashing and separation. Benefits include obtaining dry husk, which can subsequently be burned as biomass, and reduced loading in mash vessel and wort separation which lowers overall energy use.

Find out more about how we can help boost your brewing capacity and capability in an efficient, cost-effective way.