Auckland Light Rail is looking firmly back on track, with an announcement from Transport Minister Wood and Cabinet on the preferred option for mode and route expected early in the New Year.  If Cabinet endorses the Auckland Light Rail Establishment Unit’s recommendation, we will see the City Centre connect to Māngere via modern tram along a partially-tunnelled route, running underground from Wynyard Quarter to Mt Roskill, and then up at street level to Auckland airport.

Earlier this year the World Bank released a first-of-its kind analysis of the shape and growth of nearly 10,000 cities between 1990 and 2015.  The analysis found that a city is most likely to be its ‘best version’ when its growth and form is driven by economic fundamentals and a conducive policy environment – a robust job market, flexible building regulations, dependable public transit and access to essential services, public spaces, and cultural amenities.

Horizontal growth has traditionally been considered a natural evolution for many cities, including Auckland.  However, it should go without saying that as cities grow, one way to create more space per inhabitant is by building up instead of out.  Not only is ‘building up’ more economically efficient in many ways (particularly for maximising existing infrastructure and supporting social and community services), but it can also help address some of the key challenges facing urban communities across the globe – creating cohesive communities, reducing overcrowding, improving walkable access to open space and services, discouraging long commutes, and drawing more people to public transit - as well as reducing greenhouse gas emissions.

The fundamental challenge facing Auckland as a small global city is how we make our city more sustainable and inclusive, for ourselves and at least equally importantly, for future generations.  For Auckland to become a successful city for the future, locals and visitors will need access to an effective public transit system.  In turn, maximising the benefits of this public transit system will require providing sufficient opportunity for residential and economic growth and intensification.

Auckland’s success will depend on how successfully we coordinate our investment in ‘connective’ infrastructure and integrate this with land use planning and enablement, for increased intensification of opportunities.  As with other international cities of a similar scale and setting to ours (e.g. Portland, Seattle, Dublin, Copenhagen, Vancouver), who have invested in their public transit networks – the aim for Auckland is to shrink the physical and economic distance between people / community (through high density residential areas) and those of high productivity, such as the city centre and the Auckland Airport precinct, as well as key town centres and employment nodes along the corridor.  This will be key to maximising the opportunity which the Auckland Light Rail project presents to transform our city.

While independent transport will continue to be needed, we have reached the point where it is no longer sustainable for cities to operate with private cars as the predominant transport mode.  There are numerous reasons for this - the effects of climate change and the need to reduce emissions is one thing, but the sheer number of private vehicles and dedication of land resources to infrastructure to support vehicle use is another.  All Aucklanders agree on one thing - that Auckland traffic is terrible.  The need to decongest our transport systems from an efficiency perspective means that we cannot continue the private car dependency.

The Auckland Light Rail project represents a key opportunity and first new step for how Auckland can help address these challenges – and how we can think about reshaping our urban environments, as we modernise and transform our transport network.

Successful public transport networks support and create successful, more sustainable and inclusive cities by providing better connections and accessibility.  They can be a major contributor to economic, social and environmental goals.  Key to a successful system is the frequency, reliability and connectivity within a network.  The type of service(s) and how the network connects across a city is critical.  Many of us have travelled abroad and experienced (and maybe even expected) an efficient and well-connected public transport system to allow us to move around that city – it is no different for Auckland.

How we plan and design our public transport system directly impacts how we shape our city, and influences how our city functions.  Just as the decisions of the past have shaped present-day Auckland, the decisions we make today will shape the city of our future.

In fact, public transport has been a key part of our past.  Auckland was once served by a network of horse-drawn trams from 1884 to 1902, until electricity supplanted horsepower with the introduction of a fleet of electric trams from 1902 to 1956.  This modern network covered 72 kilometres in its heyday from the mid-1930s, until closures began in 1949. 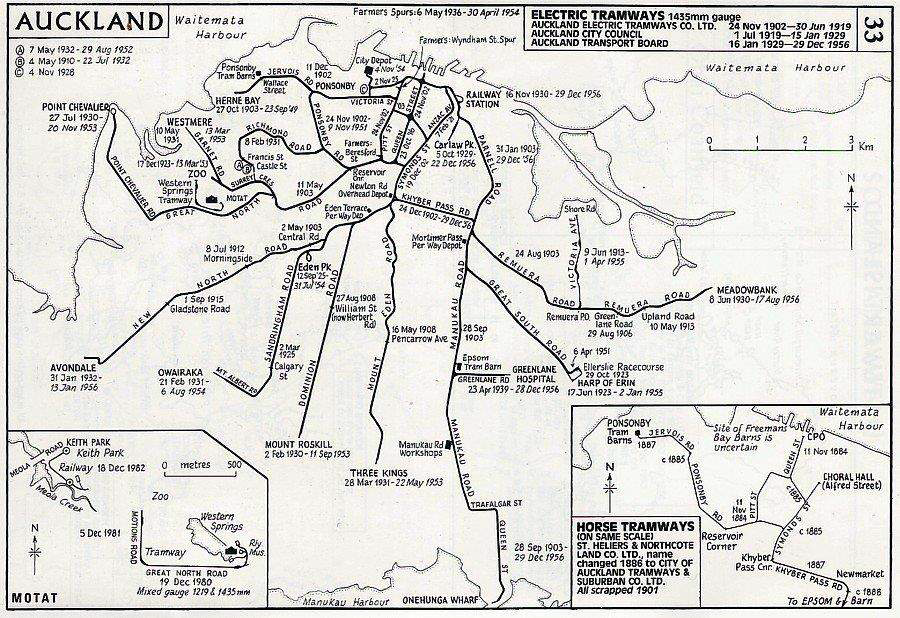 Like many other cities round the world, as private vehicle ownership began to grow from the 1950s onwards, these early tram networks were decommissioned and over time were replaced with transport networks designed with the private car in mind. The planning and design of our transport networks prioritised individual ease of movement and connectivity, with key parts of the network ‘separated’ from neighbourhoods – further emphasising the focus on ease of individual movement reliant on personal vehicles.

However, this prioritisation of movement and connectivity for individuals and personal vehicles – without an equivalent prioritisation on the planning of the urban environments alongside these transport networks – had unforeseen outcomes.  How our historical transport networks were designed often resulted in dividing up parts of our urban environments, separating neighbourhoods from key services and amenities, as well as each other.  Valuable areas of land and public spaces were often ‘cut off’ and left under-utilised, particularly along our coastal edges like the Onehunga foreshore.

The effects of this (mis)prioritisation are apparent not just in the physical environment, but also in social changes that resulted from fragmented urban communities or severance from local services – the “school commute” is an example of behaviour that has arisen at least partially due to car dependence, but more broadly reflects changes in social interactions that come with fragmented and unconnected urban communities.  This is not unique to Auckland, but rather a pattern that has repeated itself throughout many cities across the globe at this time.

What can we do to create the Auckland we want – a city that can function and meet the needs of all its residents into the future?  We need to shift behaviours and relinquish this post-World War II, car-dominant approach to how we plan our transport networks – and more importantly, we need to integrate the planning of these networks with the urban environments which surround and connect them.

If we get this planning right, rapid transit like Auckland Light Rail can assist to integrate with and unlock the potential of other ‘city-shaping’ interventions across Tāmaki Makaurau.  Such a system can be a major “stepping stone” to transforming our city, by helping create a more equitable and inclusive society.

Both at home and abroad, policy makers and ‘city shapers’ alike are grappling with how we can better connect and build our cities in such a way that we maximise our ability to tackle the key challenges we face moving forward.

Better integrating our transport networks with the urban environments they traverse can create multiple benefits, including:

How Light Rail can transform Tāmaki Makaurau into the future

Auckland’s Light Rail rapid transit project can be a catalyst – both to begin to address these key challenges directly, and amplify other major initiatives and investments.  But an improved public transit network cannot make a successful Auckland on its own.

While the transport system can provide Tāmaki Makaurau with a healthier circulatory system – it will be the people along the corridor which will be its lifeblood and the key places its vital organs.  The system will not thrive without also investing in the future health and vitality of the key places and spaces where people live, work and play. And it is reassuring to know this investment is already underway – at significant scale and pace.  Over 11,000 new Kāinga Ora homes are planned for and being delivered in Wesley and Mount Roskill (with more also planned for Māngere), both key neighbourhoods served by the corridor.

This additional enablement for, as well as provision of, higher residential densities along the project corridor directly reinforces the learnings from the recent World Bank analysis – the investment in the key connective infrastructure of Auckland Light Rail needs to be coordinated and integrated with transformational land use changes.  These neighbourhoods will receive more homes for people who need them – healthier and drier homes, different types and sizes of homes to meet differing family needs and situations.

But it’s not just about houses for houses’ sake – these historically disadvantaged neighbourhoods will also receive much needed investment in key community services and amenities, improved public and open spaces, and greater connection and integration with broader Light Rail-enabled opportunities across wider Auckland.

Extending modern rapid transit into parts of Mt Roskill and Onehunga (that were once well-served by public transport but overlooked in the last 60+ years), and into Māngere, will open up connections to the network and offer choices for many people and communities that are currently under resourced in terms of travel options and access.  Improving connectivity across and through Auckland provides opportunity to promote change and assist in “lifting” under-resourced areas both socially and economically.

Better integration of land use and transport planning will also support Auckland Council’s ability to meet its intensification requirements under the National Policy Statement on Urban Development, with the means to identify and provide additional capacity for medium and higher density development, particularly around proposed station locations.

Aligning the urban regeneration of communities and neighbourhoods along the corridor with the improved access to opportunities which a rapid transit system can provide, presents the chance to achieve a generational step-change towards creating a healthier, more equitable and inclusive Auckland.

Coming up next in our Auckland Light Rail series, Kathleen Bunting - Technical Director Urban Planning, will consider the project’s role in shaping and delivering positive outcomes for Tāmaki Makaurau, and how these benefits could be maximised.