After reaching a record low in 2017/18, road tolls in Australia are on the rise again. As governments and councils mobilise to address this issue, Beca’s Transport Advisory Principal David Silvester draws on international best practice to consider how best to reduce crashes and save lives.

According to the Australian Automobile Association’s widely endorsed Reviving Road Safety Strategy, our nation’s road trauma statistics are not improving fast enough. While there has been a gradual decline in fatalities since 2010, the spikes we’ve seen since 2015 suggest we can’t rest on our laurels. Right now, every month around 100 Australians die on our roads and every day more than 100 Australians are hospitalised for road-crash related injuries – one every 15 minutes. Apart from the emotional burden to the community, road trauma has an enormous economic cost of around $34 billion each year. 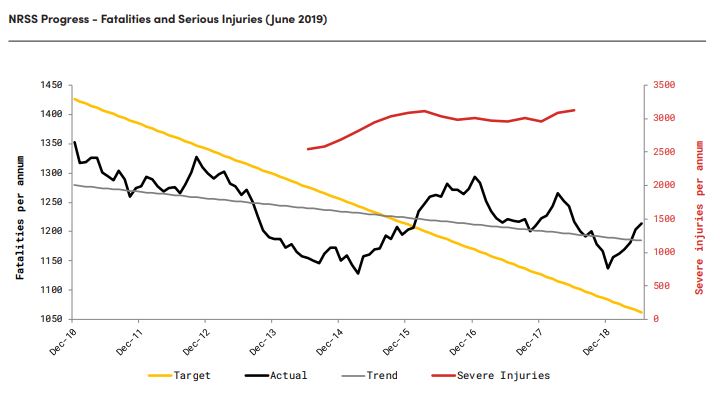 But this pain is not spread evenly across the nation. In the last 12 months, we’ve seen spikes in road deaths in South Australia and Victoria, increasing by 27.4% and 19.6% respectively.

We also have a stark divide between major cities and rural Australia. As the graph below shows, the impact of the road toll is felt most heavily by communities in remote and regional areas. The National Road Safety Action Plan also reports that two-thirds of all road crash deaths occur in regional and remote areas – most in zones of 100 km/h or higher.

1. Driver behaviour
While deaths from drink-driving-related crashes are substantially down from a decade ago, more incidents are being caused by drivers distracted by their mobile phones. According to the NRMA, using your phone while driving increases your risk of a crash four-fold. This is why, in NSW, drivers using a phone illegally receive extra demerit points.

Meanwhile, as Australia’s ICE and opioid crises worsen, road deaths from crashes involving a driver or motorcyclist with an illegal drug in their system have almost doubled since 2011. It’s a particular issue in rural areas where police are spread thin, and the current stress on rural communities has led to increased drug use.

2. Continued use of older vehicles
According to the Bureau of Infrastructure, Transport and Regional Economics, 36% of the reduction in Australia’s road toll between 2000 and 2017 was due to the use of safer vehicles, with features like airbags and ABS. Since then, we’ve seen the widespread introduction of crash avoidance systems where the car senses and takes control if a crash looks imminent. Eventually, such systems will be an important factor in reducing the road toll. However, Australia’s vehicle fleet is getting older, the average age up from 9.8 years in 2015 to 13.1 years in 2017. At this rate, it will take in-vehicle technology 15 to 20 years to work through the country’s whole vehicle fleet. And we can’t wait that long to address our current levels of road trauma.

3. Road conditions
We know that roads with built-in safety features – safety barriers, wide medians, audio-tactile line markings – reduce the likelihood of a crash and its severity. Yet, as the 2016 Australia Road Assessment Program found, a significant proportion of national highways lack these features.

How should we respond?

The National Road Safety Action Plan is on the money with its systemic emphasis on safe roads, safe speeds, safe people and safe vehicles. These principles are also being used by the Victorian Government’s Towards Zero Strategy and by many other countries including: Sweden, Canada, United Kingdom, France and Norway.

At the heart of all these endeavours is the recognition that road safety is a shared responsibility. It’s not just about initiatives to improve driver behaviour. Even well-intentioned people make mistakes and innocent people get caught up in crashes. We need to make our road infrastructure safer so, when crashes do happen, they don’t result in death or serious injury. This requires a multi-dimensional system approach including:

With a million kilometres of roading network, it will take time for Australia to move towards zero deaths and serious injuries. But we can accelerate progress by rallying the community around a national target and sharing learnings as we go.

We also need to understand what works. For example, when reflective cat’s eye centre line markers were first introduced in New Zealand, drivers started to speed up at night because the markers created the illusion of safety. While the evidence suggests these markers are generally effective, the New Zealand experience shows us the importance of constantly measuring to make sure our investment is actually improving road safety.

Learn more about Beca’s road safety services and how we’re working with road safety stakeholders to strive towards a future free of deaths and serious injuries on our roads.

[iii] How safe are our roads? Australian Automobile Association (2016)

[v] Road deaths from crashes involving a driver or motorcyclist with an illegal drug in their system, Bureau of Infrastructure, Transport and Regional Economics (2018)