I always knew we would come back

It was 22 February 2011, when the lives of everyone living in Christchurch would be changed forever. In the six years that have followed we’ve adapted to a new-normal paradigm in this unstable environment. Our people in Christchurch were relocated to various office spaces around the city and we’ve all got our stories of how we’ve contributed to the rebuild. Today, on 10 April 2017, we celebrated our move back into the central city community, and the start of an exciting new future.

The day started badly enough when, while just about to bike down into the basement car park at the office, a kid on a bike jumped the kerb behind a van straight into my path – crash, bang, blood, swear words, buckled wheels and bent front forks. It got much worse. Just after 12:45pm I put a note in my diary reminding me to record the previous hour-long office Social Club AGM on my timesheet. It was the last thing I’d write in that diary for about six weeks. The day was 22 February 2011 and five minutes later the lives of everyone living in Christchurch became fundamentally changed forever.

We’d already had a large earthquake about six months earlier in the wee hours of 4 September 2010. My wife and I were woken with violent shaking. We leapt out of bed and stood huddled together in the doorframe in the dark, the house heaving and banging around us. She asked if we were going to die. She’s never let me forget that my reply was “I don’t know”. It was unquestionably terrifying. Nonetheless, given the scale of the earthquake, remarkably little major damage was done in the city. Some central city buildings were damaged beyond repair. Areas in the eastern suburbs suffered from liquefaction; a new word in the vocabulary for most of us. Overall, most of us escaped relatively unscathed. It was later deemed the ‘lucky earthquake’.

22 February was something altogether different and a whole new level of terrifying. It was much closer to the city centre, at a very shallow depth, and it was in the middle of a working day. While huddled in fear under my desk as the shaking intensified the prospect of the 20-storey PWC building collapsing around me seemed very real.

Once the shaking stopped, I vividly recall getting up, scanning the debris of fallen bookcases and papers scattered everywhere and seeing one of my colleagues pointing outside. I looked out to see the PGC building across the river from us – it had pancaked and, as we later found out, 18 people died in the collapse.

While advice is to stay inside during an earthquake, I just wanted to be well away from this suddenly unstable building. Opening the door to the stairwell, I joined the stream of descending people using their mobile phones as torches because the lights had failed. Once outside, we had to jump a large ledge that had formed between the vehicle ramp and the footpath, where muddy water was pouring out of newly-formed cracks.

Standing in groups on the bank of the Avon River, doing a headcount, we could literally see the river level rise before our eyes and the PWC building doing a sinuous dance with every aftershock.

After we’d accounted for everyone as far as possible, a group of us set off to find a car and head back to the refuge of my house, which came through relatively unscathed last time. The walk and drive were in a shocked silence. There was water and liquefied material everywhere. Dazed people were walking and driving over, around and through puddles of indeterminate size and depth – sometimes with disastrous consequences. Everyone, bar the emergency services, was evacuating the city centre. The skyline was marked by the tower of the Hotel Grand Chancellor leaning on a crazy angle.

After a very slow drive we got to my house to find that this time it had suffered more than just superficial damage – to the extent that I couldn’t open my front door. It was starting to dawn on us all that this was going to be a life-changing experience.

After finally meeting up with my wife, we borrowed a crowbar and managed to get into our house. The scene wasn’t pretty and we made a quick decision to spend the night at my sister’s place in Rolleston, outside the city.

It was a night of mixed emotions – relief at being safe together with all the extended family, fear as aftershocks continued to shake us awake throughout the night and, worst of all, being woken around 5am with a four-word text from my best friend, finally replying to mine, querying his well-being: “House munted. [Wife] missing.” Despite my own rationalising as to why his wife would be missing, the hours became days of diminishing hope until it was finally confirmed that she had died. While stopped at traffic lights on Manchester Street, a building façade had fallen on her car. She left behind a husband and two young children. She was one of 185 fatalities on that awful day.

Those initial few post-earthquake weeks were a blur of heat, dust, overhead helicopters, no power, road closures, lack of water, aftershocks, interrupted sleep, fear, road cones, tears, portable toilets, hi-viz jackets, buildings spray-painted by urban search and rescue teams, worry and uncertainty. Personal markers for me were phoning team members to check their well-being and hear their immediate post-EQ stories, setting up a temporary office, preparing and reading a eulogy at a funeral and cleaning up the mess of broken glass, crockery and other household effects in our house – try cleaning up a smashed jar of honey, bizarrely mixed with a button collection, without the benefit of water.

Through all the dark times the community spirit that developed was enormously heartening.

A degree of black humour shone through. The suburbs of Cashmere, Huntsbury and Mt Pleasant were re-named Trashmere, Muntsbury and Mt Unpleasant respectively. The landmark formerly known as Shag Rock was reduced, literally, to Shag Pile. With the on-going jolts of fear as we were woken multiple times in the night with aftershocks, we were said to be sleeping like babies – waking every few hours and s****ing ourselves. We became all-too-familiar with the meaning of red and yellow-stickered buildings and TC 2 and 3 land. We developed a finely-tuned internal seismograph – playing games amongst ourselves, guessing the magnitude of each shake we’d just felt. And ‘resilient’ and ‘long-suffering’ were widely used in the media to describe the people of Christchurch, to the increasing chagrin of many.

Through the last six years we’ve adapted to a new-normal paradigm in this unstable (in multiple senses) environment. We’ve experienced a sequence of almost 15,000 aftershocks. The central city cordon was in place for 860 days. 1,250 buildings in the ‘Four Avenues’ were demolished. With some 100,000 homes damaged, 10,000 have required complete demolition. Virtually all of us have had protracted dealings with insurance companies and/or the Earthquake Commission in house repairs. Some have had to rebuild or relocate, while others have been displaced from our homes. Whole communities within parts of the city have disappeared. Roadworks have seemed never-ending. The whole geography of the city has changed.

Besides the disruption, it’s been a time of opportunity – innovative and creative people, such as Gap Filler, have come to the fore - who would have thought a coin-operated open-air “Dance-O-Mat” would have proved such a hit with uptight Cantabrians? The containerised Re:Start Mall became a destination for locals and tourists. Seeing new cafes, restaurants and shops opening – or old favourites re-opening – has come with a sense of excitement as the rebuild has gathered pace. My personal favourite, though, has to be our local Coffee Zone coffee shack – built out of little more than pallets, Lego blocks and great customer service. The girls there are my own exemplar of client service excellence.

For about four months my team was working out of portacoms that we rapidly set up in March 2011 at the city’s wastewater treatment plant. Others were based in a hotel’s conference rooms overlooking a cordon point into the central city – manned by soldiers in armoured personnel carriers.

For those at Beca, it’s worth remembering just how lucky we were – we all remained in employment and the wider company rallied behind us, supplying laptops and other essentials; not least of which was colleagues volunteering to come and work with us in the ‘war zone’.

Those in the retail and hospitality sectors typically had a much more fraught time in subsequent weeks and months.

I was one of a few selected to go back to the PWC building for a strictly-imposed 20-minute supermarket dash to round-up of everyone’s essentials from their desks and bookcases. I confess my own priority was my cufflinks collection. It was the last time I entered the building. It has since been reduced to a below-ground urban pond, complete with broken concrete pillars, twisted reinforcing and a few floating plastic ducks.

Those intervening six years have seen our people in Christchurch move into various office spaces around the city. Our ‘temporary’ office (which turned into offices) in Sydenham became increasingly cramped as the team grew and the years passed. We had a team at the Medical Assurance Society office in Merivale and, up until the end of March, a few stalwarts remained at the Stronger Christchurch Infrastructure Rebuild Team office to close out the project.

For a long time the city centre was a place of demolition. It got to the stage that driving through was a disorienting and demoralising experience – whole city blocks had been cleared. It became difficult to remember what had been in those grey empty spaces before the earthquakes. This was my home city and what the earthquakes hadn’t destroyed, the demolition crews were finishing off. It was a city without a centre – a doughnut, punctuated by tall cranes and demolition equipment like the euphemistically named ‘Twinkletoes’ that gobbled its way through our former office home.

Gradually that experience has become much more positive and it continues to gain momentum. New and exciting buildings have been sprouting up. None is more significant for Beca than our new home, the ANZ Centre, right in the beating heart of the rebuilt city. It’s been planned and programmed for around four years and, throughout that period, the target moving-in date has been April 2017. Named Project Tahuhu, it was underpinned by values of collaboration, connection, enjoyment and pride. We resonated with them; we felt them. And today, we celebrated as we moved into our new office together.

Thank you to everyone who helped secure safe short- and medium-term office spaces, contributed to the recovery of our city and the build of our new office space, and most importantly of all, showed a tenacious spirit throughout the past six roller-coaster years.

I always knew we would go back… and I, for one, love it. 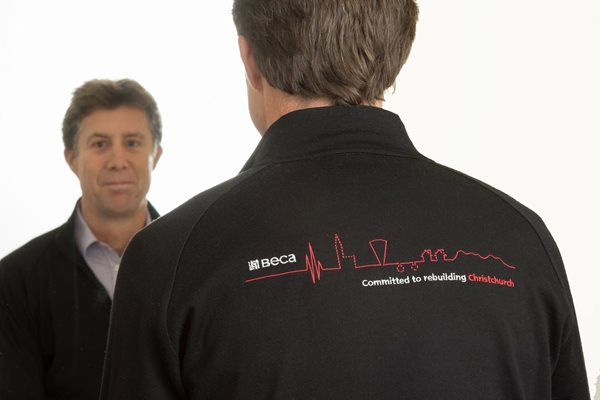 Proudly wearing my post-earthquake Beca pullover - it’s become a badge of honour. The image was designed by Emily Cambridge, Team Leader and Landscape Architect, in our Design Practice team.